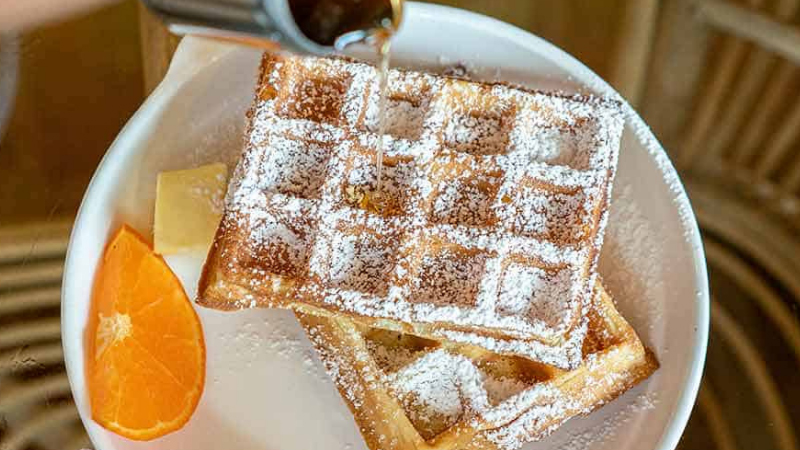 Whether you are a waffle aficionado or not, you must have noticed the difference between Regular and Belgian waffles.

And the question comes naturally to you: can you make regular waffles in a Belgian waffle maker or vice versa.

Well, to be blunt, you can, but the result would be far from what you have expected. The difference in the recipe, shape, and test demand different types of makers.

Nevertheless, as we said, regular waffles in a Belgian Waffle maker are doable. And we are not saying that out of the blue. We have looked into many homemade waffle makers' opinions and suggestions to say that for sure. So, let's dig into it.

Can You Make Regular Waffles in a Belgian Waffle Maker?

While the two waffle types are more similar than different, you must have noticed the groove size and fluffiness variation between them. Regular or traditional ones tend to be flatter, thinner, denser, and crispier.

So, can you make regular waffles in a Belgian waffle maker? Well, why not? Just make the traditional batter with all necessary ingredients, open the maker, pour the batter in, cover the lid and wait a few minutes before flipping the maker. Your waffles will be ready in no time.

But something looks different, right? Also, the waffles are not as crispy as you expected.

Well, this is because the Belgian waffle maker has larger grids, resulting in deeper grooves or pockets. And bigger grids induce more fluffiness and thickness as opposed to flat and thin.

You might also notice that Belgian makers comparatively take more time to get heated. This is, again, because of the pocket size.

This slight variation in the maker results in a traditional waffle that looks like a Belgian one. So, if you don’t like what Belgian makers do to your regular breakfast meal, we recommend using the traditional maker. 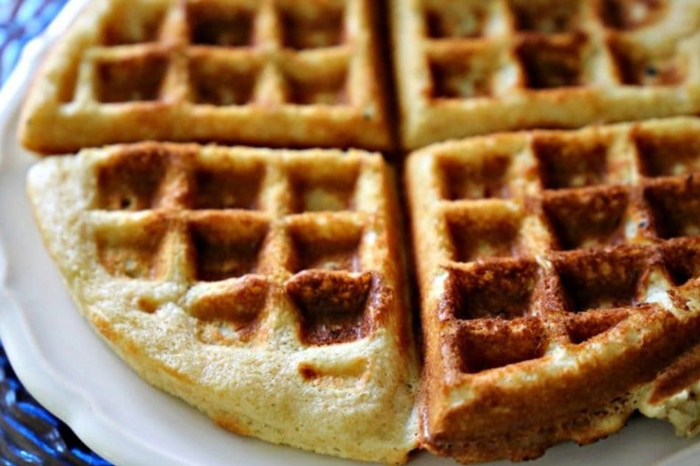 Nevertheless, being a lover of fluffy waffles, if you happen to have a Belgian maker at home, don’t stress; indeed, you can make regular ones with it.

Can You Make Belgian Waffles in a Regular Waffle Maker?

Like most people, we assume you also have a regular maker at home. And while you are happy to have delicious waffles for breakfast or dinner dessert every day, you wonder if it’s possible to make Belgian waffles.

Well, we are glad to inform you that the maker type doesn’t limit you when it comes to making waffles of any kind.

However, you might want to keep in mind that if you intend to make Belgian ones, the result will be far from genuine without the specific maker type.

Let us elaborate. Unlike regular waffles, Belgian ones require yeast or egg whites in their batter. So, when you pour it into the maker, the batter rises and produces softer and lighter waffles. 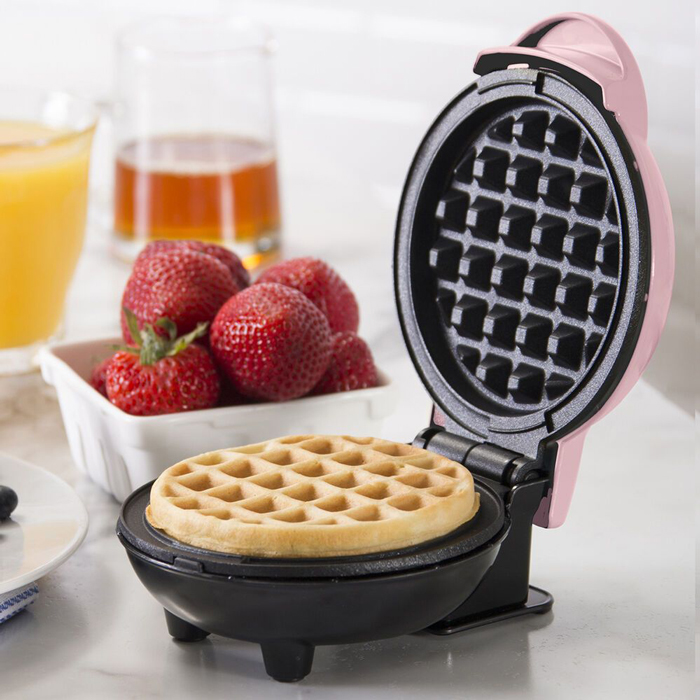 Now, the regular makers don’t have large pockets to accommodate the batter rise. That translates into a waffle lacking fluffiness and softness.

So, even if you got the recipe right, don’t expect to have the authentic Belgian waffle with the regular maker.

Also, traditional makers are smaller, which is another disadvantage while making Belgian waffles.

But hey, we are not saying that you can't make Belgian ones in traditional makers; it's more like you shouldn't if you want a genuine taste. Otherwise, it's doable, and the waffle is edible as well.

Although a regular maker might not produce fluffy waffles, it provides you with multiple functionalities. You can make eggs, toast, and many more with it.

Waffles are a delight to have, whether it’s your regular morning meal or weekend family dinner dessert. 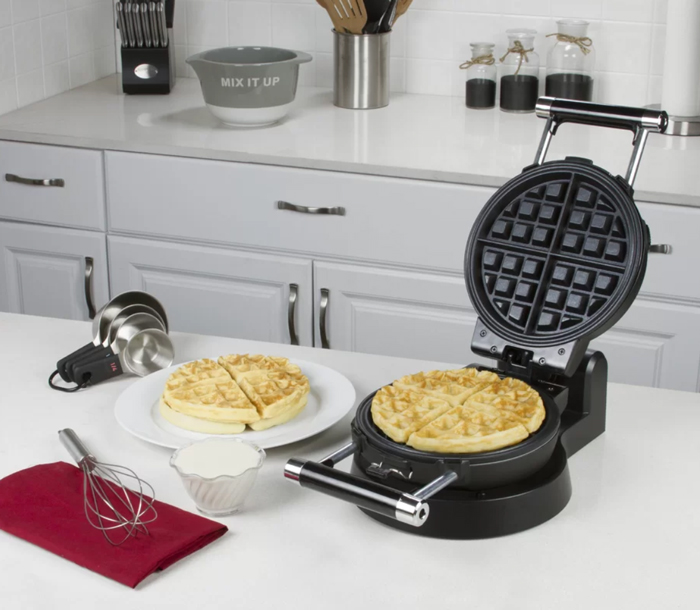 And the traditional waffles vs. Belgian waffles are not something to debate on. Instead, we are here to show you the basic difference between the two.

Well, as the name suggests, they originated in Belgium and began to attain popularity in the late twentieth century. But, apart from their origination, the variations in the recipe and maker type make them noticeably different.

Having these waffles in front of you, the first thing you will notice is how light yet thick they are.

And the reason behind this is that most of them are yeast-based. So, the batter rises in volume when you put it inside the maker, resulting in a fluffy inside with a crispy texture outside. 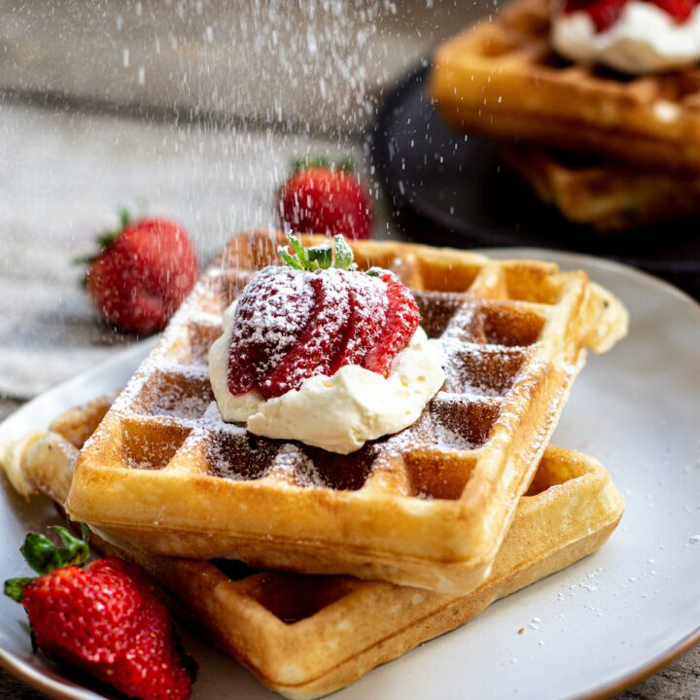 In the absence of yeast, you can attain lightness with beaten egg whites. Just separate the whites before making the batter, and then fold the whipped egg whites in at the end.

Some people prefer to keep the batter overnight to enjoy the extra softness and fluffiness.

In addition, they tend to have larger pockets as the maker has larger grids. Bigger pockets also translate into more toppings space. Load them with fruits, syrup, honey, ice cream, whipped cream, or anything you like.

These waffles are also known as American, traditional, or classic waffles. The recipe is somewhat similar to pancakes, including eggs, baking powder, milk, butter, and other essential ingredients. Besides, some people love to add a small amount of buttermilk to get a richer flavor. 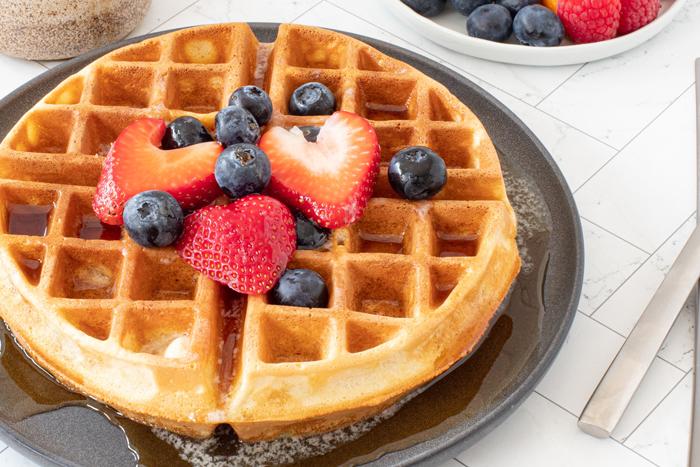 They tend to be smaller and have smaller grooves as you make them, with a maker having smaller grids. And as the batter doesn’t contain yeast as the leavening agent, they are flatter and thinner as well.

However, you can make them in various shapes. There are a lot of shapes available, from tiny hearts and rectangles to your favorite cartoon character.

So, the next time your kid wants to skip a meal, serve him/her a Mickey Mouse or a cool zebra waffle!

And we don’t dare say that this is the best. But it’s the Belgian people who came up with such an amazing recipe that you cannot help falling for. The result is, you end up buying a maker just for that.

But then you wonder, can you make regular waffles in a Belgian waffle maker. Although the answer is yes, the produced regular waffles will somewhat resemble the Belgian ones. And the reverse is true as well.